“LeBron James wasn’t even top-10 but Kobe Bryant was in Nick Wright’s top 5 back in 2012”: FS1 analyst’s obsession with Lakers star LeBron only began when he got on TV

Home » Basketball » “LeBron James wasn’t even top-10 but Kobe Bryant was in Nick Wright’s top 5 back in 2012”: FS1 analyst’s obsession with Lakers star LeBron only began when he got on TV

Nick Wright goes on national TV every day these days to talk about how LeBron James is the GOAT. But it wasn’t always like this for the FS1 analyst.

Now Nick Wright has only been a regular feature on TV for the past 5 years. But he’s continuously pushed his agenda that LeBron James is the GOAT for basketball all this while. Why would that be? And why would he go against the grain so heavily?

The notion that LeBron is the greatest of all time first got traction after the 2016 NBA Finals. We’d never seen a 3-1 comeback in the NBA Finals before this. It was a sight to behold, and many people became prisoners of the moment.

It was also the perfect time for media outlets to reignite a GOAT debate that had essentially been dead. Jordan was acknowledged as the sport’s undisputed GOAT right after his very first retirement. But sports media felt it prudent to bring it to the top from the backburner.

James has made it to 3 more NBA Finals in the past 5 seasons since then. He won only one of those and lost one of those series by the greatest margin in NBA Finals history.

So these are pretty solid grounds for people to put him on their Mount Rushmore of basketball. However, the idea that Kobe Bryant doesn’t belong on there wasn’t very popular back in the day.

It’s becoming more and more popular now that Nick Wright and Shannon Sharpe go on TV to talk down on Kobe. But there was a time when Nick didn’t quite hold LeBron in the same regard. The tweet below proves this. 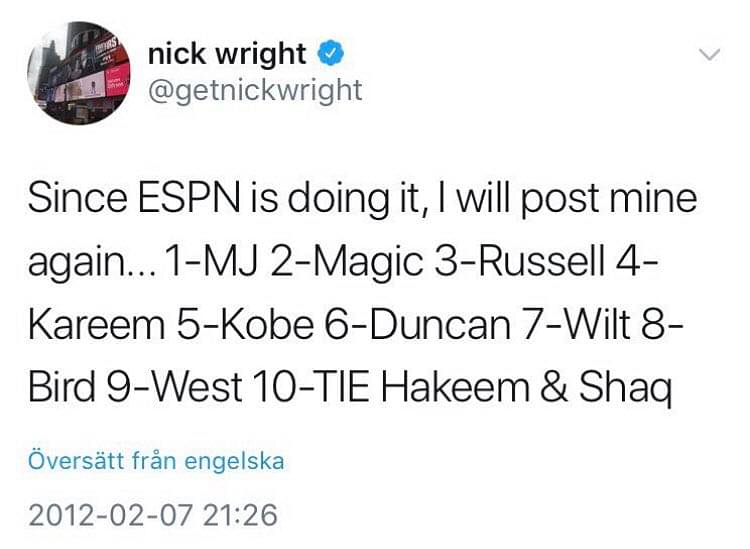 Same with Nick Wright. He had Kobe top 5 and Lebron wasn’t even top 10 back in 2012 lol pic.twitter.com/GGkiZtSuWM

These tweets are just further proof that you shouldn’t let your sports talking head dictate your own top-5 lists.

"That's something I always live by": Kobe Bryant once revealed how an English teacher in school touched him enough to adopt a mentality he followed his whole life

Richard Jefferson proclaims his love for superteams following the Lakers trade for Russell Westbrook, by listing out…