“I didn’t even want him banned” : Macaiyla Responds to Jake Lucky Tweet after Valorant bans the person who racially abused her

Home » ESports » “I didn’t even want him banned” : Macaiyla Responds to Jake Lucky Tweet after Valorant bans the person who racially abused her

Macaiyla and Jake Lucky : Streamer Macaiyla faces sexist abuse by her teammate after losing a match in Valorant.

Valorant can’t seem to catch a break with toxic behavior from fans and players alike. Not even a week after Sinatraa was accused of sexual abuse by his ex-girlfriend another incident is coming to light.

Twitch streamer Macaiyla is on the brunt of a sexist and abusive tirade by her teammate. Riot is aware of toxicity against female gamers and even addressed the same in a reddit post. They said they are working to make the game more safer. In the meantime they just want players to report the accounts that are being abusive.

Macaiyla was playing the final round in the match and went for a knife kill. She could not completely execute it and it resulted in her team losing. One of her teammates did not take this well and went on a rant. The streamer was called names and abuses were hurled at her.

The language used was very sexist and at one instance the player also expressed a desire for her to be subjected to physical violence in real life. The clip was shared widely and users are appalled at the rant. Curiously though Macaiyla seemed not that bothered about this whole incident. Click here to watch the Clip

Macaiyla and Jake Lucky take potshots at one another –

After the incident Esports news personality Jake Lucky tweeted, “Spoke to Riot Games and Valorant, appropriate action has been taken against the player in the Macaiyla clip. Thank y’all for the help.”

Spoke to Riot Games and Valorant, appropriate action has been taken against the player in the Macaiyla clip. Thank y’all for the help.

But he probably did not consult Macaiyla before reaching to Riot and this rubbed the wrong way. Macaiyla responded with her own tweets which are now deleted. 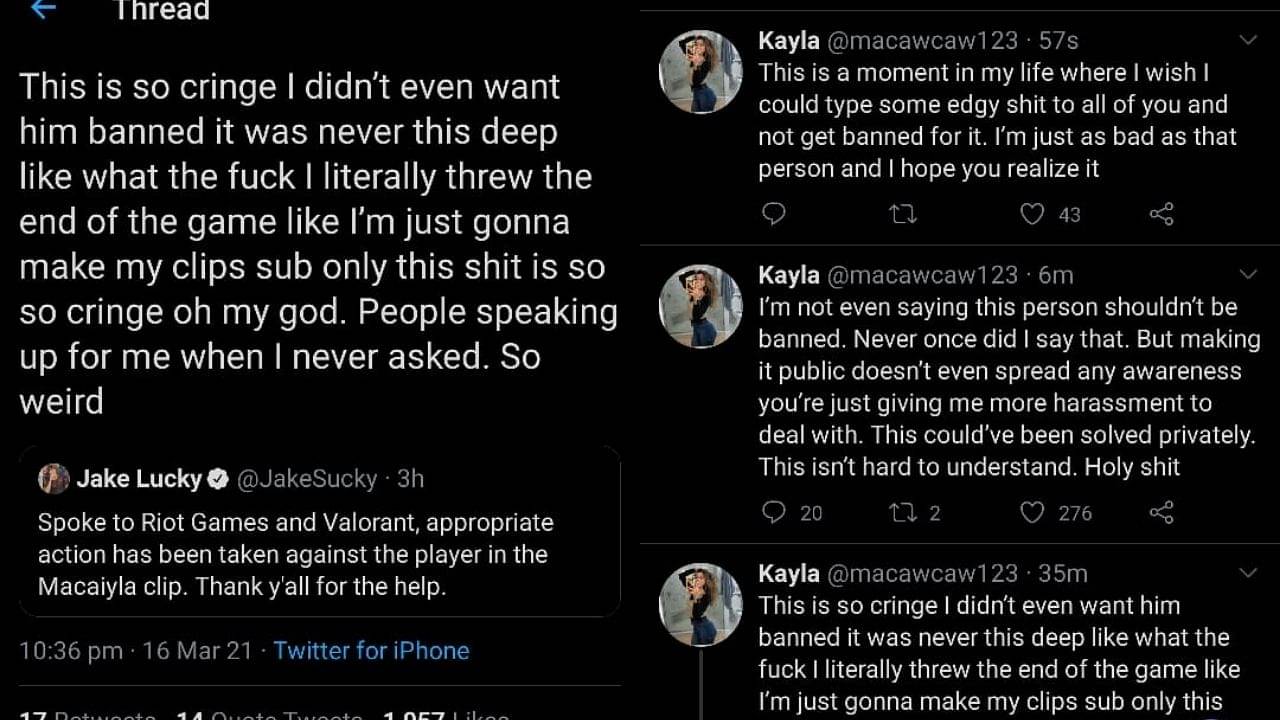 She said she would have preferred the issue to be solved privately and Jake’s tweets could result in her facing more harassment. Lastly she said,” I am just as bad as that person.” Jake has tweeted out an apology over the whole thing. But all of this is confusing and has just divided fans.

Sorry for anyone I offended in the process.

“I want to be here forever”: Von Miller expresses his love for Bronco nation after Denver exercise contract option