Paige hilariously gets confused with Diamond Dallas Page in Magazine. The former Divas Champion was mistaken for for the 65-year-old WWE Hall of Famer.

Paige is one of the most recongnized wrestlers that have ever performed for the WWE. That however, didn’t stop an article from the Metal Sucks magazine to incorrectly identify the former Divas Champion as WWE Hall of Famer Diamond Dallas Page.

Also read: Former Universal Champion says he has a bone to pick with John Cena

The article focussed on her Falling in Reverse singer boyfriend Ronnie Radkea. The magazine mentioned his relationship status mentioning that Radke wasn’t married but had been in a relationship since 2018 with DDP instead of the The Anti-Diva.

Paige hilariously gets confused with Diamond Dallas Page in Magazine

Paige tweeted out a screengrab of the mix-up with the caption:

“Imma need to speak to the manager of this magazine…”

Imma need to speak to the manager of this magazine… pic.twitter.com/cc4yMkDeiT

I’m a big fan of your match with Goldberg at Halloween Havoc.

Paige decided to have more fun with the mixup posting a couple more tweets about it on her Twiiter Handle. 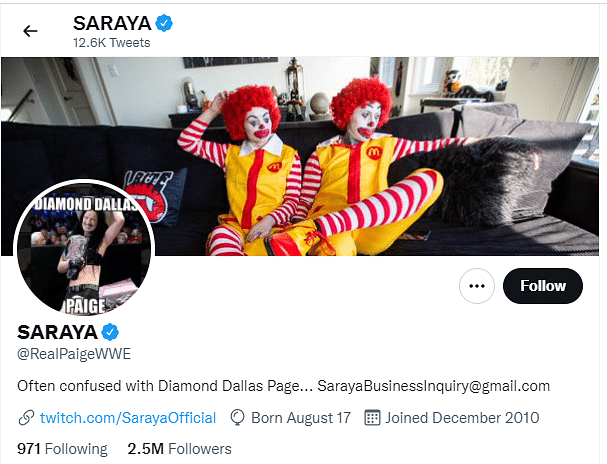 Paige was forced to retire back in 2018 after suffering a neck injury at a December 2017 WWE live event. She has since expressed hope of returning to the ring one day.

"Players today have no pride and just join the team they lose to!": Shaquille O'Neal disses the modern era of the NBA yet again on the Big Shot Bob podcast

WWE Star reacts to fan asking him to join AEW on social media. There has…