Playing only his fourth IPL match across third season, Valthaty had announced himself in the best possible manner hitting 19 fours and a couple of sixes against a bowling attack led by Mahendra Singh Dhoni and comprising of Tim Southee, Albie Morkel, Ravichandran Ashwin and Suraj Randiv.

13th batter to score a century in the IPL, it was only the third IPL century for a Kings XI batter. Valthaty, who was 27 at the time, had become the third Indian batter after Manish Pandey and Yusuf Pathan to score an IPL century.

In spite of a breakout IPL season, Valthaty couldn’t manage to convert his potential into performance in the subsequent seasons. Valthaty, who played only seven matches across the next two seasons, wasn’t bought by any other team after KXIP.

While a wrist injury didn’t help his cause, Valthaty played the last of his 43 matches across formats in domestic cricket during IPL 2013. Born and having kick-started his career at Mumbai, Valthaty even moved to Himachal Pradesh without a lot of success.

Paul Valthaty is doing commentry, He Played for KXIP in IPL and has century also…
Good to see him after long time..#INDvsZIM

Valthaty, 38, has commenced his career in the commentary box today. During the first ODI of India’s tour of Zimbabwe 2022 in Harare, Valthaty called the game from Sony Sports Network’s studio in Mumbai. 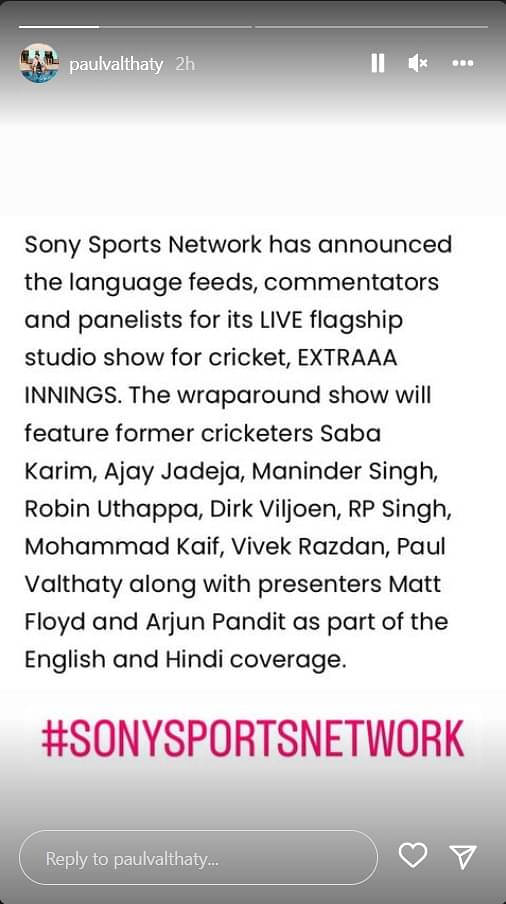 Calling the match for the first time in the day in Hindi alongside former India pacer Vivek Razdan, Valthaty recollected memories from the past speaking about his memorable IPL innings in addition to representing India under Parthiv Patel during ICC U-19 World Cup 2002 in New Zealand.