The whole F1 fraternity except Red Bull came out in front to condemn the racist comments allegedly made by Nelson Piquet towards Lewis Hamilton. Reportedly, the former F1 champion called the Briton “a little black guy” after he collided with Max Verstappen in Silverstone last year.

It seemed like Verstappen would manage to avoid himself from this controversy, as he is dating Piquet’s daughter Kelly Piquet. But it seems like the Dutchman would have to give some answers as his partner liked Rodrigo Piquet’s post defending Nelson.

Rodrigo posted on Instagram that his grandmother used to call everyone in the family ni***s. Further, he called the whole world hypocritical for turning on Nelson for his comments. 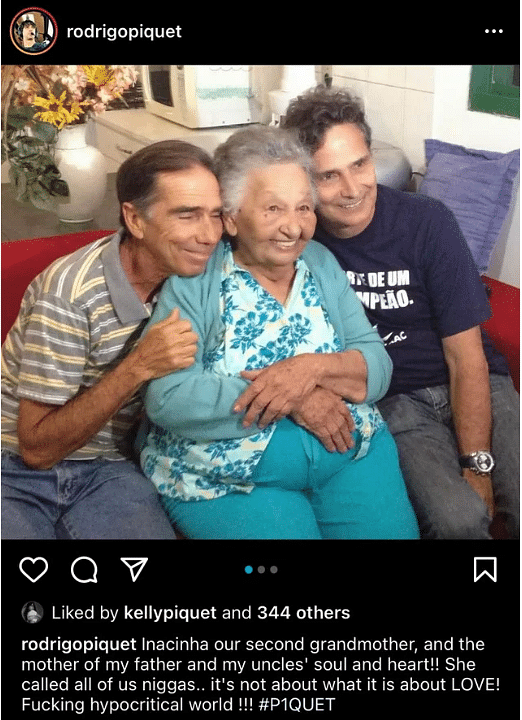 The F1 fans quickly spotted Kelly liking the post, but it’s being told that she soon unlike it. On the other hand, Rodrigo turned his account private to avoid angry comments from F1 fans.

Also read: Lewis Hamilton sends cheeky reply to fan who asked him to call Nelson Piquet out on Twitter

Hamilton didn’t stay quiet against the comments made by Nelson. He took on Twitter to express his contempt toward the racist mindset he discovered.

Meanwhile, he also urged that he would want to change these mindsets, but till then they don’t have a place in F1. On the other hand, F1, FIA and several teams supported Hamilton against the racist comments he received.

It’s more than language. These archaic mindsets need to change and have no place in our sport. I’ve been surrounded by these attitudes and targeted my whole life. There has been plenty of time to learn. Time has come for action.

Meanwhile, Red Bull is one of the teams which hasn’t issued any public contempt against Piquet’s comments. Chris Medland claims that the Milton-Keynes-based team will not be making one in future too.

Ferrari in reply to the Mercedes statement. Have been at Red Bull this morning (for its hypercar launch) but the team says it won’t be issuing a statement on Piquet’s comments #F1 https://t.co/yHyiFt2vD3

Meanwhile, several reports state that FIA is contemplating the ways to punish Nelson. Rumours say that his access to the F1 paddock can be revoked if he doesn’t publically apologize to Hamilton.

Understand that Nelson Piquet’s access to the #F1 paddock could be revoked if he doesn’t issue a public apology to Lewis Hamilton.

Also read: When Eddie Jordan had worst F1 take towards Michael Schumacher in history of sport

"I'd have 10-15-20-30 shots of Jagermeister and go home at 5": Dennis Rodman's regimen while playing with Michael Jordan was bizarre