“No matter what he’s said about me, I have huge respect”– Lewis Hamilton congratulates his compatriot Tyson Fury despite latter alleging seven-time world champion avoiding taxes in UK

Home » F1 » “No matter what he’s said about me, I have huge respect”– Lewis Hamilton congratulates his compatriot Tyson Fury despite latter alleging seven-time world champion avoiding taxes in UK

“No matter what he’s said about me, I have huge respect”– Lewis Hamilton congratulates Tyson Fury despite the differences between them.

Tyson Fury caused a storm on Sunday after his recent win against Deontay Wilder WBC that made him retain his heavyweight title in Las Vegas after 11 rounds of a lengthy saga.

Like most of his countrymen, even Lewis Hamilton was elated with his win, and despite the bad blood between them, the seven-time F1 world champion congratulated him with his Instagram post.

“You can’t deny the Fury. He’s worked through all the lows to remain on top. No matter what he’s said about me, I have huge respect for the work and commitment and sacrifice it takes to be the number 1,” wrote Hamilton on Instagram.

“Congrats champ, blessings to you and your family. Enjoy this time you’ve earnt it,” he added. Hamilton is referencing the ‘I pay taxes’ sly dig Fury used on Hamilton earlier this year. 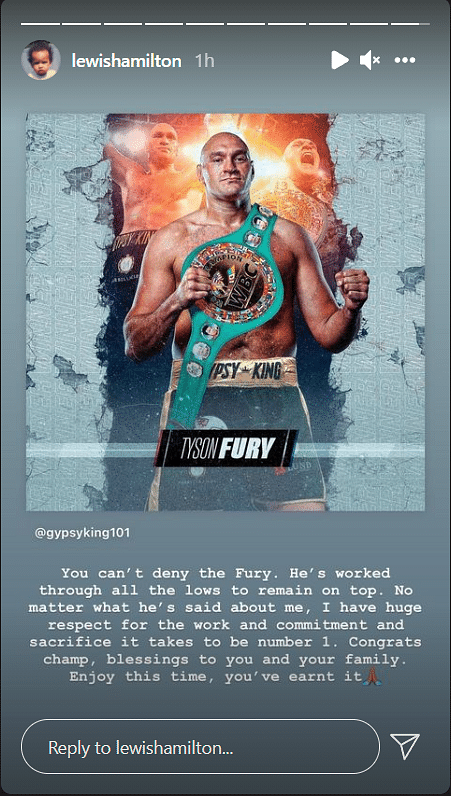 Also, this was not the first instance when Fury targetted Hamilton, in 2015 responding to the online petition for his removal from the shortlist for the BBC’s Sports Personality of the Year award by labelling the 60,000 people who’ve signed it “wankers” and telling his critics to “suck my b—s, which included athletes like Andy Murray and Hamilton.

“What personality does it take to drive a car around a track 100 times? Or hit a ball back and forth?” said Fury in 2015.

Hamilton has been accused of saving taxes by making Monaco his haven, but a report by the HMRC statistics, published in 2019, Hamilton was among the top 5,000 highest taxpayers in the UK despite living abroad for most of his racing career.

Moreover, Motorsport UK chairman David Richards sent a letter to Prime Minister Boris Johnson in November explaining that Hamilton “is subject to withholding tax at source in nine countries” and “files tax returns in four of the nine countries”.

“What people don’t realise is that I pay tax here [in the UK], but I don’t earn all my money here,” Hamilton said to The Sunday Times back in 2014.

“I race in 19 different countries, so I earn my money in 20 different places and I pay tax in several different places, and I pay a lot here as well. I am contributing to the country and, not only that, I help keep a team of more than 1,000 people employed.”

“You don't disrespect LeBron James like that, Dillon Brooks”: When the Lakers star had to fire back after the Grizzlies guard flexed on the King tauntingly

"There is something. We don’t want to talk about"– Ferrari warns entire paddock with new engine exploits by Carlos Sainz