For Mumbai Indians, this has not been an ideal start to the thirteenth edition of the Indian Premier League. Failing to win two out of their three encounters in the league, the side finds itself already staring at a deficit from the top 4.

The manner in which they ended up losing their foregone affair is one the side will be beating itself about. After throttling themselves towards a sensational recovery in their run chase against RCB, a tie which went down to the super over, Mumbai’s shambolic decision making resulted in their demise.

From faltering to send out the right combination in to bat to failing to set the right field, Mumbai were left ruing their own mistakes. At the end of the day, the seven run target they laid out in the super over was way too timid and meek a score to defend, one which saw Mumbai lose grip of a match which could have easily swung their way.

Elsewhere, things weren’t any better for Kings XI Punjab who only had themselves to blame for their horrendous defeat to Rajasthan. Looking set to canter their way to the two points, a subliminal effort by Tewatia ripped Punjab into shreds to see them being dished out the largest ever run chase in the league.

With both the sides defeated the last time around and left with the sole win in three clashes, this is a crucial encounter for either team. Either side will come hot out of the blocks with Mumbai’s bowling earning them a win.

A wicket which is known to take a change in the second innings, the team winning the toss is set to come out and bat first today. Given the quick rate at which encounters are being contested here, the surface has cracked open as the match runs down its course to make chasing a gruelling affair.

Nothing changes today either with a traditionally hot day set to greet the players out onto the field.

Quinton de Kock is really struggling to get going in the league at the moment. However, Punjab’s bowling is hardly a formidable one, a unit which could see the opener settle in the middle and peel off much yearned for runs.

Ishan Kishan did everything within his capacity to pull off a win for Mumbai Indians the last time around. The batsman went berserk, scoring 99 runs to not only revive a languishing run chase for his side but take the contest into the super over.

With 69 runs the last time around, Kings XI Punjab’s opener and wicket-keeper, KL Rahul now has a century and half-century in three clashes to see him become our first pick from the side.

Also with a century and half-century in the league inside the space of three encounters is Punjab’s second opener, Mayank Aggarwal. He smashed a scrumptious one hundred and six runs against SRH to see him be a must have pick for us.

Mumbai will on the other hand see us make captain and opener, Rohit Sharma, the first pick in this docket. He has failed to get going, a player off the boil but his sprawling skill set is well known to see him be inducted in our framework.

Suryakumar Yadav will be his partner for the clash for the impending encounter, two players capable of moving in unison to blow apart a floundering Punjab bowling setup.

Kieron Pollard needed three ties to settle into his groove but once he pulled his socks up, he showed what he can do. He piled on a behemoth sixty runs, scoring them right in the tailend of the run chase to make him our lone pick in this slot.

This surface is going to be one where Mohammed Shami will hold the key for Punjab. A wicket where Shami’s versatility and ability to switch up the deliveries can see him easily go for the sucker punch and pull off crucial early breakthroughs.

Sheldon Cottrell was made a mockery of by Tewatia the last time around who cleaned him for five sixes in one over. However, we will still be reposing faith in him with him bound to pick up wickets as the batsmen go after him.

Mumbai Indians will see their new entrant, Trent Boult be snagged by us. He’s further proving Delhi wrong for letting go off him, a spearhead who has absolutely lit up Mumbai’s fast attack with five wickets in three matches.

Jasprit Bumrah is struggling to get going but his calibre and worldclass skill set makes the speedster a must have pick for us today.

MI Bat First: Punjab’s bowling could see Rohit rediscover his touch to see captain our side while Mayank is the vice-captain.

KXIP Bat First: Mayank’s riveting touch at the moment sees him captain our side while Rohit is the vice-captain. 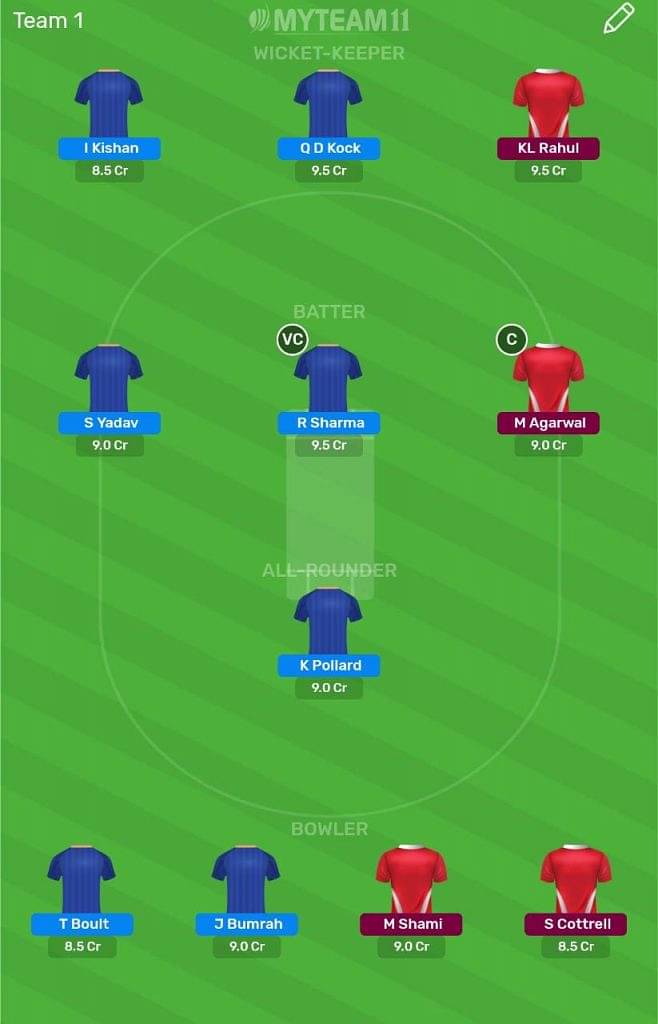 IPL 2020 double-headers: At what time will IPL 2020 afternoon matches begin in India?

MS vs PZ Head to Head Records: The SportsRush presents for you the Head to…