KXIP Vs SRH MyTeam11 Team Picks, Pitch Report, Probable Playing 11 And Match Overview: Two sides fighting for survival take on each other in a must win tie for either side.

Out of their depth and having look like they had run their race in IPL 13, Kings XI Punjab have come back from a position of no return. After a measly solitary win at the halfway stage of the marquee league, the club has now gone onto register three successive wins to rekindle its aspirations of making it to the top 4.

While there’s still a long and bumpy road to traverse for the club, things no longer look as dreary as they were a couple of weeks back for the side. With wins against Delhi and Mumbai, this Punjab side is slowly bridging the gap between themselves and a top 4 finish.

On a late surge as they flare up a candle flickering in the wind, Punjab go locking heads with Sunrisers Hyderabad today. Up against an opposition vying for a top 4 spot much like themselves today, Punjab know a win today would be a massive shot in the arm for their ambitions.

SRH are going to serve a daunting challenge to Punjab today. They are making a foray into the fray of this clash having dismantled their opposition by 8 wickets the last time around, a result which importantly saw the club’s middle-order for the first time take onus on itself.

This will be a closely contested clash, one where envision SRH’s batting unit guiding the side to a win.

Long boundaries, spin friendly conditions in the second part and a slowing track have all lead to the side winning the toss opting to bat first over here.

Evening conditions mean wind will present in abundance to provide some kind of relief on an otherwise profusely hot day.

Punjab’s leading scorer and the top run getter in the league, KL Rahul becomes the first name to be inducted in our setup for the day’s clash. Joining up with him is counterpart Nicholas Pooran who has set the stage alight this season with his clean hitting batting leaving Delhi in a tizzy the last time around.

This just hasn’t been Jonny Bairstow’s season. He’s looked out of his depth, a player scrounging for runs but despite that we are going to be roping him in owing to his ability to clean the bowlers with panache.

David Warner failed the last time around but he was up against Jofra Archer. With his most feared nemesis out of the way, Warner is set to return back stronger than ever to play a crucial knock for his side.

Manish Pandey couldn’t have rediscovered his form at a more ideal time for SRH. After a string of lacklustre showings, he burst onto the stage to thump home a man of the match innings the last time he took to the middle.

Punjab on the other hand will see their second leading run getter and opener, Mayank Aggarwal be the first pick from the club. Slotting in next to him is Chris Gayle who has needed little time to hit the ground running with him opening his arms to play some lusty blows against Delhi.

It hardly looked like Jason Holder was playing his first match when he stepped out in SRH colors the last time around. He had an instant impact at the club, snagging three wickets for the side on the day to see him nail his place in our side.

For the first time this season, Glenn Maxwell came up with anything of note for Punjab. He managed to stay around the crease to stay till the final stretch of his side’s run chase, a knock which sees us indulge in his services.

Mohammed Shami has only gone from strength to strength as the league has run its course. Now one of the most deadly names to take on, his ability to hit the yorker length is rewarding him with scalps with his registering two wickets each in his last two affairs.

A spin friendly wicket means the ball with grip and turn for Rashid Khan to see him be our pick from SRH.

SRH Bat First: Warner will love his time out in the middle with overs under his kitty to see him captain our side while Rahul is the vice-captain.

KXIP Bat First: The same picks as aforementioned with these two batsmen capable of stringing together the runs on any surface. 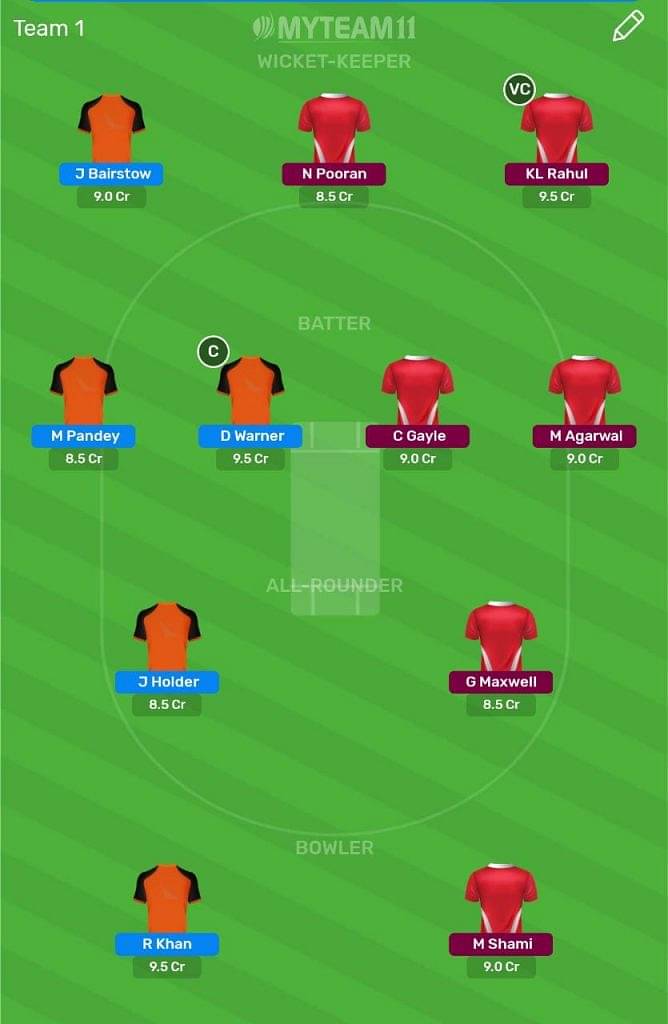