Despite never having watched prime Michael Jordan, Jamal Murray is of the opinion that he was better than LeBron James.

The GOAT debate has been reignited over the course of this year. The Last Dance was telecast when the NBA was off, and since then, James has won his 4th NBA title.

Jamal is the latest to weigh in on this red hot topic, siding with Jordan on a debate that is edging over closer to being LeBron’s, with every game he plays.

NBA Central, a popular NBA news account on Twitter, had tweeted a post with Hakeem Olajuwon. The great Nigerian big man said in that interview that he believed the comparisons are unfair. Olajuwon believes Jordan to be far superior to James, also stating that he played in a more competitive era.

The substance to this argument is the fact that the center and point guard position were quite stacked during Jordan’s time. All time greats like Hakeem, David Robinson, Patrick Ewing and Dikembe Mutombo, among others, were patrolling the paint. The likes of Isiah Thomas, Magic Johnson, John Stockton and Gary Payton were also plying their trade. 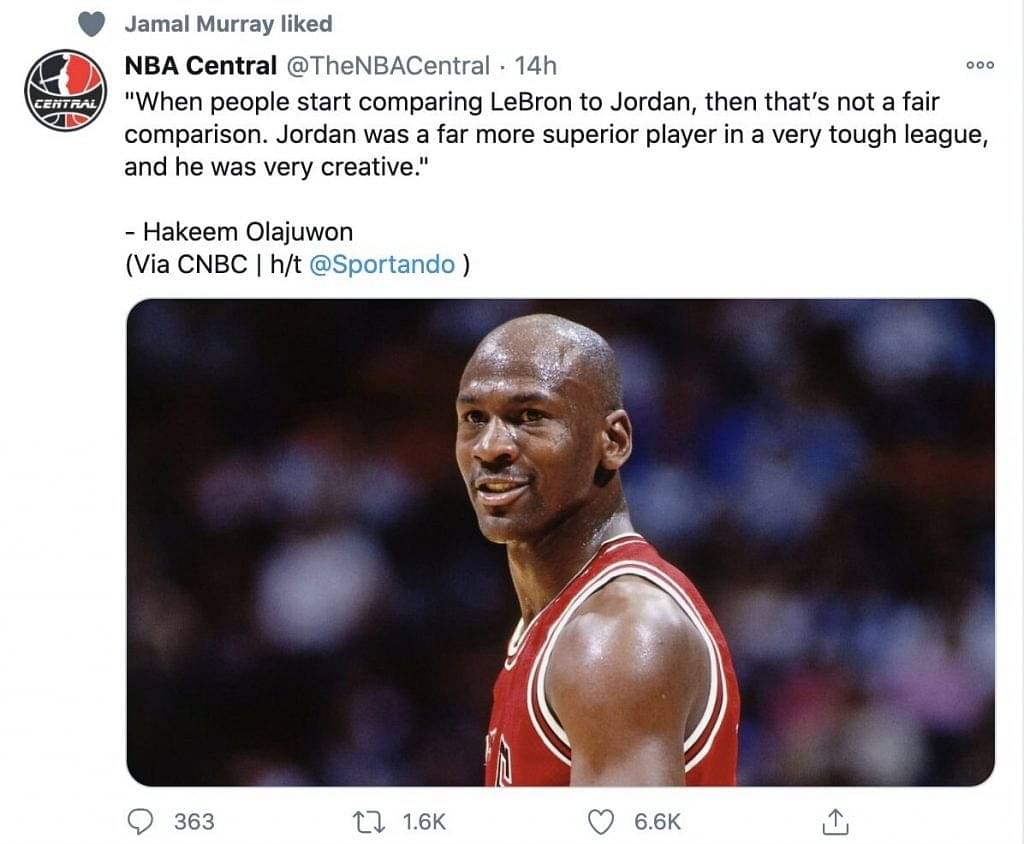 Also Read: ‘LeBron James and Kobe Bryant have one big similarity’: Lakers’ Rob Pelinka on how both NBA Legends approach the game

By stark contrast, the number of top-50 players of all time to be in their peak during LeBron’s career is only a handful.

While James is a physical phenomenon unlike any we’ve seen in NBA history, his dominance doesn’t stack up to Jordan’s. That is possibly another reason why legends of times gone by don’t rate him as highly as contemporaries.

Murray probably falls on the side of the old-timers. Although him liking one tweet is little by way of substantiation of his stance, Murray could well come out and explain it in times to come.

'Don't respect anything about him': Lakers' JR Smith slams ex-teammate as only player he didn't like in 16 year career

'Heat's loss has an asterisk next to it, not the Lakers”: Pat Riley clarifies his statement towards LeBron James and co.