Bronny James might not have his old man’s physical attributes but skill wise he is trying to be as good as LeBron James.

At 18 years of age, the kid from Akron was ready to play against the men in the NBA with his 6’8 height, 240-pound huge built, over 7-feet wingspan and some of the most outrageous skills that anyone had ever seen in a single player.

17-year-old, 6-feet-3″ Bronny James, the oldest of James’ three kids is far from his father’s physical attributes. The senior at Sierra Canyon School is also only among the top 50 players in the 2023 recruiting class. But he does have some of his father’s skills in him.

Like father like son. Bronny James pulled a LeBron James signature dunk out of his pocket and Savannah couldn’t be more proud.

King James is of the biggest supporters of Bronny out there. Despite his several businesses worth around a billion dollars and an offseason to prepare for another go for an NBA Championship in LA, the 37-year-young LeBron can be seen courtside in most of Bronny’s games.

Thursday night both James and his wife Savannah posted stories of one of their son’s highlight dunk that totally resonates with LeBron’s own move back in the day. 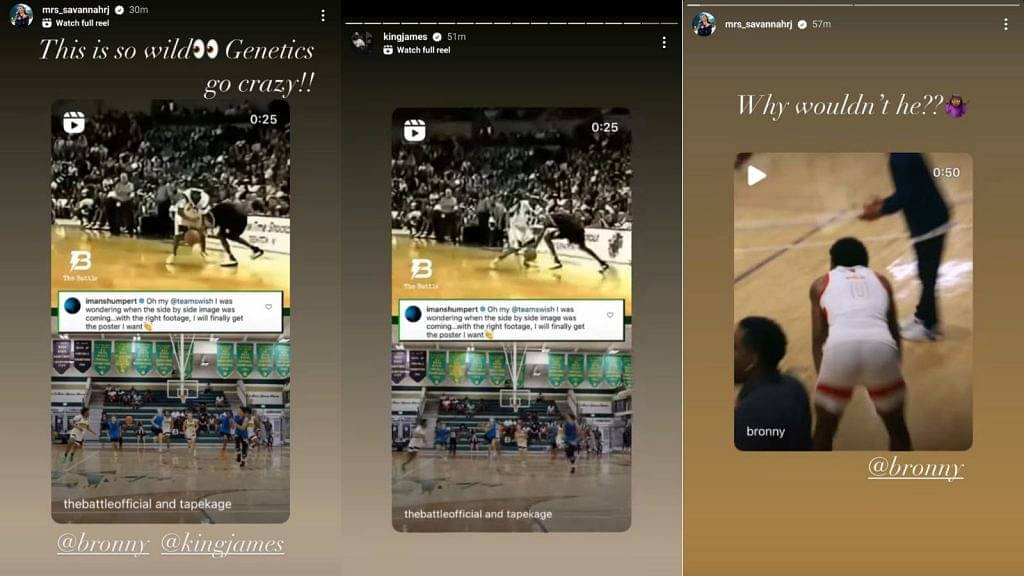 To this date that is still the Laker’s star signature poster. Maybe it’s Bronnie picking the brains of his dad in the practice sessions at home or it is just the genes Savannah’s so proud of, either way, he has the potential to make it to the league before his father’s retirement.

It is now in public and most NBA teams’ interest that the father-son duo plays in the same team come 2023 when senior James will be a free agent. Forget championship or playoffs, the bank that team will break in rights and sponsorships wherever this duo plays would be mind-boggling.

Also read: Anthony Davis, Paul George, Kawhi Leonard – 3 superstars in Los Angeles, but only one gets trolled for his injury problems

A sports enthusiast, crazy about basketball and football. Like putting forward my opinion on the things I know about, but restrain myself from doing that in my articles because my job is to report. Cover everything Lakers and NBA-related, both old and new.