Shaquille O’Neal, who recently settled a $25,000 restaurant bill, once fell asleep in the middle of a meal at NYC

The former Lakers legend is currently one of the hosts of the famous ‘Inside the NBA’ segment on ESPN where he finds new and hilarious ways to discuss and analyze the NBA.

There have been countless stories of how Shaquille O’Neal has spent egregious amounts of money at once. He holds the record for the largest purchase in Walmart history amongst other things, and so he holds a reputation for being a big spender.

Shaq’s net worth is enough to cater towards his lifestyle, but it also sometimes makes for some crazy stories. He’s built that net worth through strategic and valuable investments. He makes a great deal of money every year from his businesses, and it’s admirable to see.

26 years ago today was the last day of the Shaq & Penny era.

They were both just 24 years old and only played 3 seasons together. pic.twitter.com/AMbLLIwMWr

Earlier in June this year, Shaq showed off his benefactor mentality when he picked up a massive tab at a restaurant in New York. The Lakers center was on a date at the Jue Lan Club when he decided it would be a good time to pay for everyone else.

“Spies told us he popped in with the unidentified woman, whom he was overheard describing as “my date,” and ordered Beijing chicken, shrimp tempura and the restaurant’s signature chicken satay. She did all the ordering,” an insider told Page Six.

“And to top that off, he paid for everyone’s check [who was] dining at the restaurant. “We’re told the bill amounted to “well over $25,000 in checks.”

$25,000 is no small amount, but that’s who Shaq is for you. However, there’s also another side of Shaq, one that likes to sleep a lot. In 2012, a friend of the Lakers center shared a picture of Shaq passed out in a New York restaurant.

You can take a look at the picture here. 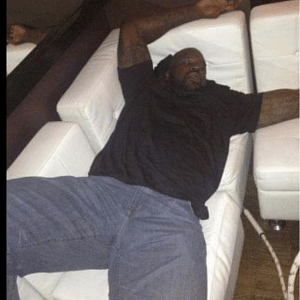 Shaq’s sleeping habits have been called out before too when Dwyane Wade and Candace Parker pranked him when he fell asleep on the set of his show.

.@Candace_Parker & @DwyaneWade had to mess with Shaq after he dozed off 😴😂 (via @SHAQ) pic.twitter.com/Y6aV7LzoBN