“Yo NBA, give me my money back”: Lakers star Montrezl Harrell demands that the NBA give him his money back, after being fined

Home » Basketball » “Yo NBA, give me my money back”: Lakers star Montrezl Harrell demands that the NBA give him his money back, after being fined

Los Angeles Lakers big Montrezl Harrell implores the NBA to return the $20k they fined him for the scuffle against the Raptors.

The Los Angeles Lakers faced off against the Toronto Raptors earlier this week. The defending champions managed to hold their ground and secure a 110-101 victory. It was a collective team victory for the Lakers, as 7 different players scored in double digits to make sure the Lakers secure the win.

However, the thing that attracted the most attention during the match was a scuffle between OG Anunoby and Dennis Schroder.

Temperatures rising between the Raps and Lakers. 😤 pic.twitter.com/NxVmy77CaP

Also Read: “If LeBron James beats the Brooklyn Nets, is he not the GOAT?”: Nick Wright puts Lakers MVP over Michael Jordan if he were to beat Kevin Durant and his ‘unbeatable’ team

This resulted in Montrezl Harrell getting fined $20k. The NBA also announced that it would be suspending Talen Horton-Tucker, Fred VanVleet, and DeAndre Bembry one game for leaving the bench during the scuffle.

While a lot happened on that sequence, the contact by Montrezl Harrell did not seem to be worth the $20k fine that the NBA imposed on him. Harrell’s teammate Jared Dudley had the same opinion.

20k for a light push to get people off his teammate? Come on man.. Players get more hurt from Flagrant 1 fouls in a NBA game. That fine is 2500… I know NBA doesn’t want a real fight and I totally understand that but these pushing fines for there version of escalating is crazy https://t.co/pRuJcHyqz5

Harrell took it to his Instagram story and demanded the NBA to pay him the fine money. 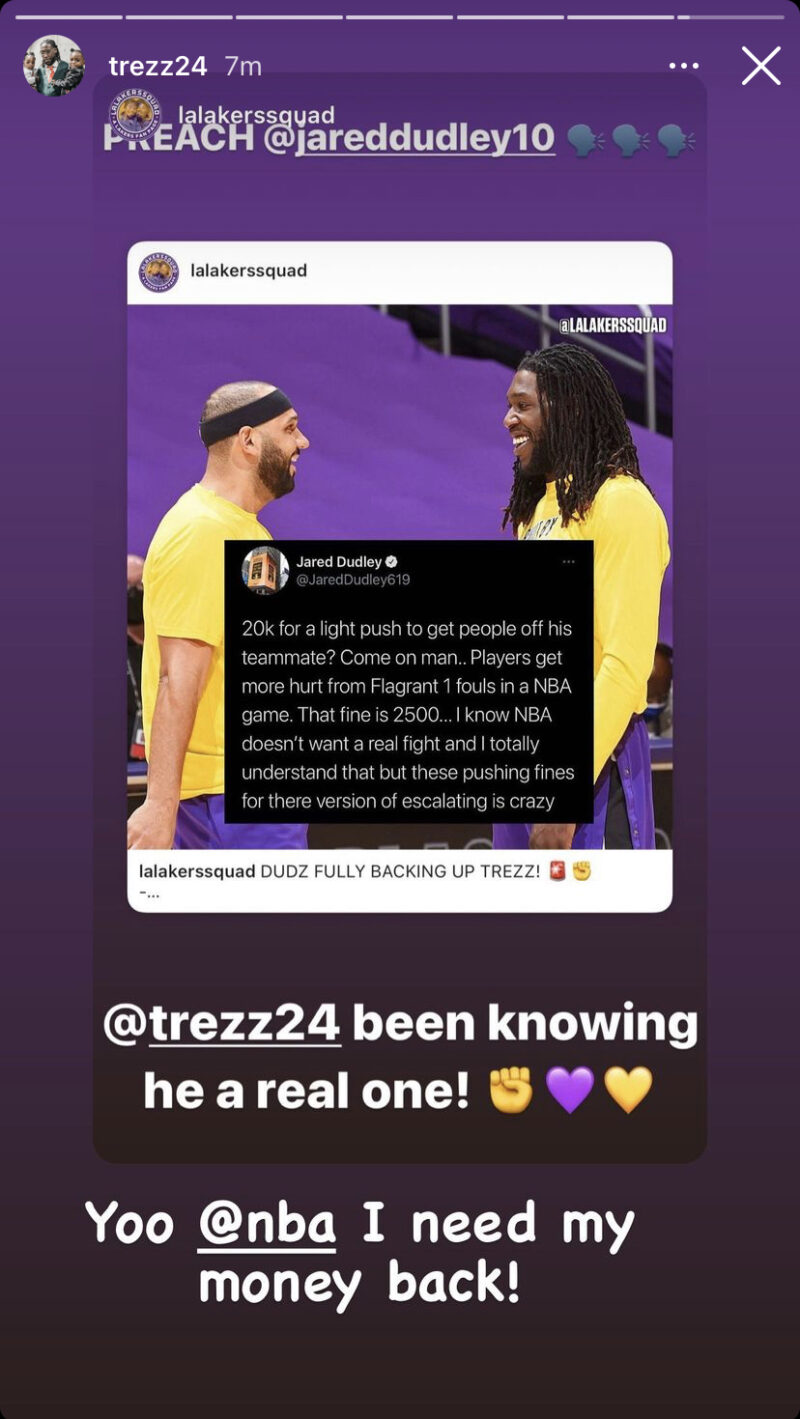 Dennis Schroder has said that he would pay the fine on behalf of Harrell. However, it doesn’t seem like the league would be returning any money anytime soon.

The Lakers, after suffering a loss to the Miami Heat tonight, are now on the 5th spot in the West. They face the mighty Nets next, on 10th.

"Rajon Rondo is the most underrated point guard of all time, real talk": Kendrick Perkins lavishes praise on his former Celtics teammate