Russell Westbrook has always had an intriguing fashion sense, but not all people agree with it, including a former NFL running back.

The Lakers guard is a big spender on clothes. He always tries to look the most fashionable before a game, and his outfits never disappoint.

They’re always unique. Rather than going for simple shirts and jeans which everyone can pull off, Westbrook is much more daring with his choices.

In an interview with GQ Westbrook sat down with Harden, and the latter tried to guess how much Russ spends on clothes a year.  “I bet Russ spends $300K to $350K,” Harden said. Westbrook didn’t refute him, indicating Harden had guessed correctly.

While he considers his clothing to be daring and challenging the lines, not everyone believes the same, and they think that it’s better if Westbrook dresses a little more ‘sensibly.’

Former NFL star Larry Johnson who was a running back for the Kansas City Chiefs, and has a net worth of $20 million now, is one of those people who don’t side with Westbrook’s clothing decisions.

“[Illuminati] ritual is upon us,” he said outrageously. “This I told you so moment brought to you by…There is an Effeminate Agenda going on amongst the NBA & NFL elite, peddled by high ranking Masons/handlers to indoctrinate the heterosexual sports world without them knowing, for the buying power of the LGBTQ community… But we not ready to have that conversation yet.”

It’s unclear how Westbrook’s fashion sense links him to the Illuminati, and Johnson didn’t offer any explanation as to why either. As for the LGBTQ part, it seems like the former running back is trying to pick at loose ends. 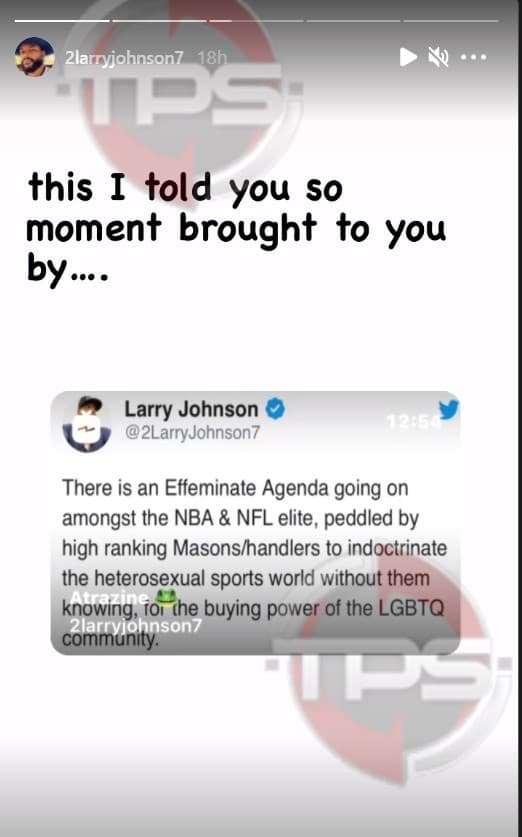 It doesn’t make much sense in the grand scheme of things, and the comment itself can be seen as very offensive. Former NBA plater Kwame Brown sided with Larry Johnson.

Even rapper Boosie Badazz took issue with the Lakers star.

Rapper Boosie Badazz has an issue with Russell Westbrook’s New York Fashion Week outfit: ‘As dads…we got to protect our kids’ https://t.co/wd1T3ZP0Rs

All in all, these claims are dumb. Westbrook is a grown man who can choose to dress however he wants. He isn’t doing any harm to society with his clothing choices, he’s merely expressing himself through his clothes in the way he wishes. That’s something you can’t take away from him.