Will The Guard or NRG clinch the final NA VCT Stage 2 Playoff spot?

The Guard go against NRG on the 12th of June and the winner will take the last playoff spot for NA VCT Stage 2.

Both teams have performed underwhelmingly in the NA VCT Stage 2 Group Stage. NRG and The Guard have only won one series each and coincidentally, both their wins was against TSM. NRG are currently standing 5th, whereas The Guard are just an inch above standing 4th. 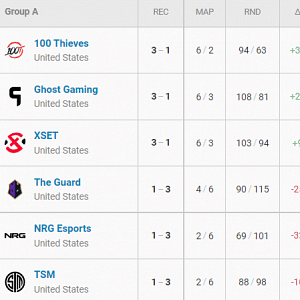 NRG had signed Ethan before the season started and it was proving to be a great addition uptill now. The Guard, on the other hand seems to have lost their original momentum and seems different. Which team will be up for the challenge?

The Guard’s roster is pretty much unchanged with Trent, Sayaplayer, neT, JonahP and valyn. This roster surprised us in NA VCT Stage 1 by winning it and directly moving onto Masters Playoffs. However, after their initial dominance, their run ended with an early exit in Masters Playoffs. Fans were ready to see another bout of dominance from the young-guns but it was underwhelming. Sayaplayer and Trent are the only players who seem consistent as The Guard is fighting for their last chance.

NRG on the other hand looked pristine with Ethan added to the roster. Tex, hazed, s0m, eeiu and Ethan were looking powerful in the Qualifiers but in the Group Stage they crumbled. Currently they stand in 5th place hanging by a thread and could definitely use some experience of Ethan. NRG have always been the team who fall under the pressure and never make it to the next stage. Are they determined enough to change that?