Alexa Bliss responds to a deranged fan who has been sending her and her husband Death Threats.

As WWE superstars, the wrestlers are exposed to candor and criticism from the fans. Although WWE is scripted, sometimes the line between reality and drama is crossed. WWE female superstar Alexa Bliss has had an uncomfortable experience on social media lately.

While it isn’t uncommon to get bizarre threats, comments, and DMs in the era of social media, sometimes the severity of the situation calls to take an action. As a popular WWE superstar, Alexa Bliss has 5.8 million followers on Instagram. Alexa Bliss recently exposed a deranged fan for threatening to shoot her and her husband.

On Instagram, Bliss posted a photo of a charity event for “The Saving Huey Foundations” on 27th May commemorating her late pet Larry Steve.

This is crazy man wtf??? pic.twitter.com/qJWxxYecTP

A fan was spotted making trouble in the comment section with disturbing remarks attacking Bliss. While it is advisable to not respond to such comments, Alexa Bliss took the matter into her hands and responded to the miscreant, and revealed that she has turned in the screenshots of the fan to the police. Reportedly, the screenshots are of death threats made by the fan. Alexa claimed that the fan has been threatening to shoot the couple. 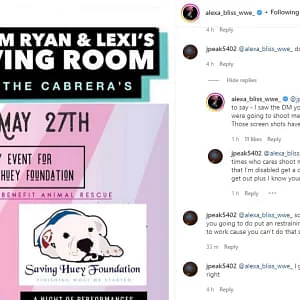 Judging by the comments made by the fan, it seems that Alexa is dealing with an obsessive psychopath.

On Twitter & I really hate that this needs to be said AGAIN – NO, you are not talking to me on any other social outlet, NO- you do not get DMs from a “personal acct” from me, NO – we are NOT dating, NO- I am not asking for $$ – & death threats 2 me & my fiancé are NOT OK

Back in March 2022, “The Goddess” took to Twitter to express her disgust towards people on social media who were trying to catfish her and swindle fans for money. She claimed that she would never ask her fans for money. She also said that the disturbing death threats she and her husband were receiving were not acceptable.

A lot of other superstars have been subject to similar situations. There have been instances when some fans entered the ring to ambush the wrestlers during an ongoing match.

“Jayson Tatum, Stephen Curry is your daddy”: Fans hilariously remind the Celtics’ star of the nightmares the GSW MVP gave Boston during the 2022 NBA Finals