“Jobbing out Asuka?! WTF?” – Dave Batista calls out WWE over treatment of Asuka

Dave Batista calls out WWE over treatment of Asuka. The former WWE Superstar was far from pleased with the booking of the Empress of Tomorrow.

Asuka’s life in the WWE was solid. Unbeaten all through her time in NXT, Champion for almost 510 days and another seven month long undefeated run on the main roster for a combined streak of 914 days, or roughly two and a half years.

She has won everything there is to win on the main roster. Apart from being a Grand Slam Champion, the second woman to achieve the feat, she has also won the Money in the Bank and Royal Rumble, as well as being the sole survivor in her very first Survivor Series Tag Team match.

Despite all her achievements however, it still somehow feels like she hasn’t booked as well as she deserves to be. Former WWE Superstar Dave Batista shares the same sentiment. The former World Heavyweight Champion has publically supported the Empress of Tomorrow in the past and he has done so once again.

Dave Batista calls out WWE over treatment of Asuka

The WWE uploaded a clip of Asuka losing the non-title match to RAW Women’s Champion Rhea Ripley on this week’s RAW.

The Animal did not take kindly to it and let the WWE know exactly what he thought of it in the comments section. He wrote: 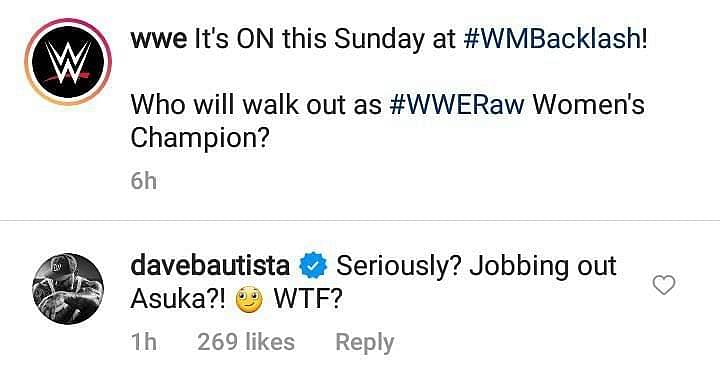 Batista is a huge fan of Asuka. Last year when Becky Lynch relinquished the RAW Women’s Championship, the title was awarded to Asuka in lieu of her winning the Money in the Bank contract. Batista expressed his happiness then, posting:

“@WWEAsuka is my f*cking hero!”

@WWEAsuka is my fucking hero! https://t.co/fkEIS2DMfa

Archie is a WWE and UFC Editor/Author at the SportsRush. Like most combat sports enthusiasts, his passion for watching people fight began with WWE when he witnessed a young Brock Lesnar massacre Hulk Hogan back in 2002. This very passion soon branched out to boxing and mixed martial arts. Over the years he fell in love with the theatrics that preceded the bell and the poetic carnage that followed after. Each bruise a story to tell, each wound a song of struggle, his greatest desire is to be there to witness it all. His favorite wrestler is Shawn Michaels and he believes that GSP is the greatest to ever step foot inside the octagon. Apart from wrestling, he is also fond of poetry and music.