Lewis Hamilton pays tribute to the American baseball player Jackie Robinson ahead of the Miami Grand Prix this weekend.

Like Lewis Hamilton, the American baseball player Jackie Robinson was also the first black man to make his mark in a white-dominated sport. In a new Instagram post, the seven-time world champion has paid tribute to Robinson.

For Hamilton, Robinson is one of the greatest American athletes who inspire him. In his post, he said, “Since I’m in the states, I’m definitely thinking of Jackie Robinson as I get ready for the weekend.”

“One of the greatest American athletes who inspire me constantly. He fought for so much, accomplished so much, and broke so many barriers.”

And on the tee, from Stevenage, Sir Lewis Hamilton… pic.twitter.com/vS31F8tPmy

Robinson broke the barrier (baseball colour line) when he started at first base for the Brooklyn Dodgers. The signing of Robinson with the Dodgers marked the end of racial segregation in baseball. Before that, all black players were only permitted to play in the “Negro league.”

As Hamilton said, the Dodgers player did break many barriers. Robinson first debuted in the Major League Baseball(MLB) in 1947 and retired in 1956. 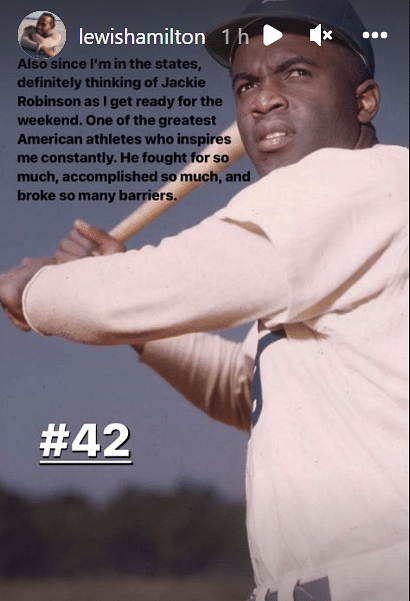 During his 10-year stint, Robinson won the inaugural Rookie of the Year Award in 1947 and was an All-Star for six consecutive seasons. He also won the National League Most Valuable Player Award — the first black player so honoured.

Hamilton is the only black driver in the history of F1. The seven-time world champion has shared his experiences with racism on his journey to the top of the sport.

A Reddit user (u/HueGray) has drawn the parallels between the two greats. Unlike many other drivers on the grid, Hamilton does not belong from a wealthy background or is not a son of a former F1 driver. He has had to be several times better than his counterparts to get half as much recognition in the sport.

Similar to Robinson’s non-violent and humble approach to fighting racism, Hamilton has never trash talked those who try to defame him or bring him down.

Nevertheless, the Mercedes star has risen to the top, equalled the seven-times world championships record of Michael Schumacher in the all-time list.

The Briton could not win his eighth title in the 2021 championship after coming so close but he entered the current season with the same energy and motivation.

However, Mercedes seems to have interpreted the new regulations in a poor way. After the opening four races of the season, Hamilton seems to be struggling with the W13 and has only bagged 28 points. He declared that he is out of the championship after the disappointing race in Imola.

Though, the Brackley-based team says that they have made some changes for the race in Miami and are hopeful for a return to the top of the grid.

Which Valorant Agent should you play?