“Damn one last highlight before LeGM does his duties and trades Anthony Davis”: LeBron James’ hype post for his Lakers teammate gets shredded by NBA fans clowning on AD’s injury history

Home » Basketball » “Damn one last highlight before LeGM does his duties and trades Anthony Davis”: LeBron James’ hype post for his Lakers teammate gets shredded by NBA fans clowning on AD’s injury history

LeBron James and Anthony Davis are going to look to avenge their terrible season last year, but NBA fans don’t exactly seem to support them.

The Lakers absolutely underperformed last season. They made the bold move to bring in Russell Westbrook from the Washington Wizards last offseason, but the move absolutely blew up in their faces.

The roster was never built to take advantage of Westbrook’s best traits, and he had perhaps his worst statistical season of his career. Everything he did on the court was viewed under a microscope.

Whether it was roster issues or coaching, the Westbrook fit was always off. To make matters worse, Anthony Davis was injured for a large part of the season.

LeBron James for his part did everything he could. He almost led the league in scoring, and he had an MVP caliber season. He perhaps would have even won had the Lakers not done so poor.

Pretty wild stat I just came across for a piece I’m working on (should be out tomorrow):

The duo of Russell Westbrook and Avery Bradley logged 1037 minutes together this past season.

That number is almost double what LeBron James and Anthony Davis tallied as a tandem: (576).

Also Read: ‘It’s blashphemy, but I would replace Wilt Chamberlain with Stephen Curry’: Stephen A Smith explains why Curry’s fourth ring would be monumental for his place in the NBA top 10 list

The King recently put out a hype video for his teammate Anthony Davis. Davis was getting ruthlessly destroyed all over social media after a video of him saying he hadn’t shot a basketball since April went viral.

So, LeBron felt the need to step up and remind everyone that Davis is one of the best players in the league when he’s healthy and that people are quick to forget.

However, the comments didn’t take too lightly to the post and made sure to point out that Davis has only played in 76 total games the last two seasons. Here are some of the reactions. 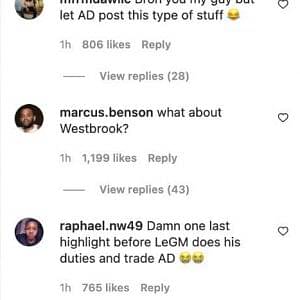 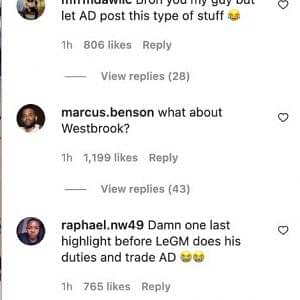 The comments may be valid, but we should give AD a chance to show he’s worth it before writing him off. If he performs well next year, well, the Lakers may be right back in the title hunt.

"I'm the petty king, and I've seen all online trash talk!": Stephen Curry shoots back at NBA Twitter for trolling on his shirt about Ayesha Curry's culinary skills

"My mom wanted me to have green hair before her death" : Marcus Smart explains how he honored his mother's memory by coloring his hair to Celtics' colors