Riot marketing team unknowing ends up adding an NFT to their Valorant marketing Campaign. And then were forced to take down the image.

You might have seen that recently, since the being of Episode 4 the Valorant Marketing team has been quite busy. They have been going through their current agents and exploring their life in their hometown.

All that tech is great, but where’s the FIRE power. It’s time to check in with Phoenix, fam. @VALORANTukn pic.twitter.com/UUltKuuNOg

And before Pheonix, we were chatting with killjoy and her hometown “Berlin“. And in one of the posts, the Valroant added an NFT which kind of backfired. 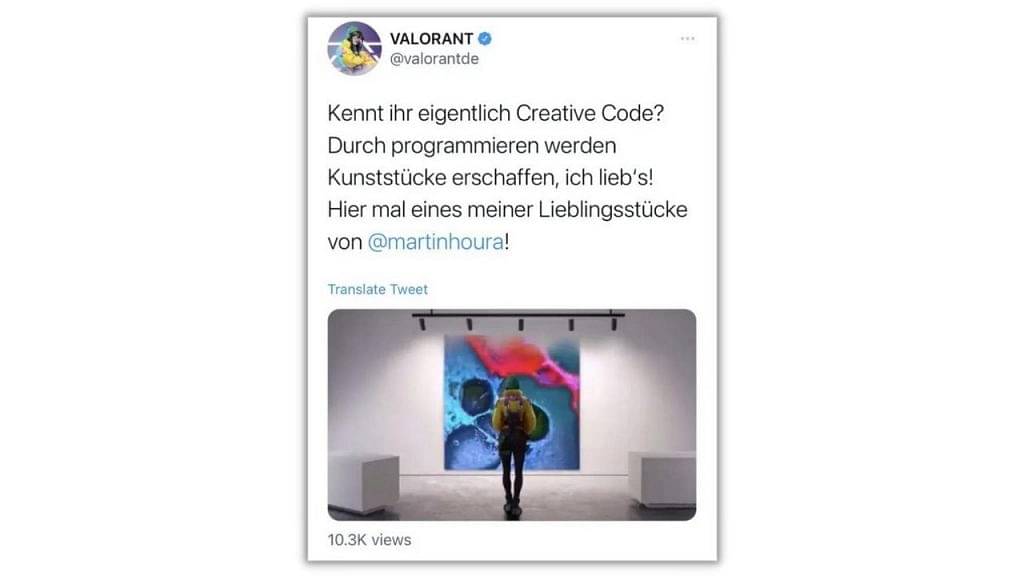 Killjoy is a Tech enthusiast, who comes from Berlin. And Valorant wanted to show this story with her admiring computer-generated art. But somehow that didn’t go as planned.

So the art that Killjoy was supposed to admire turned out to be an NFT. An NFT or non-fungible token is a non-interchangeable unit of data stored on a blockchain. NFT can be anything such as photos, videos, and audio. Where each NFT is uniquely identifiable.

The post was immediately taken down after Riot realized their mistake.

Whoopsie! We’re always trying to give you new experiences and interesting facts on our local channels, including a look into Killjoy and her hometown of Berlin.

Since Killjoy loves programming, we wanted to introduce you to computer-generated art from around the world. However, we were not aware that the selected work was an NFT. In no way did we intend to include NDTs as part of Killjoy’s work and hobbies.

Riot has been clear about one thing since the beginning. They do not prompt nor support any type of Crypto Currencies or NFTs.

“DeMar DeRozan is really winning on the court and in life!”: NBA Twitter left in awe as the Bulls star’s daughters wholesomely mimic his free-throw routine from the sidelines

"I could see it. He was broken" - Francis Ngannou resembled Stipe Miocic In the bout with Ciryl Gane

If you simply play VALORANT, you definitely know how overpowered Chamber is. Will Riot Games…