After WWE released many NXT stars, Ryback went off on Vince Mcmahon leading to strong reactions for going to far by involving his mother.

‘The Big Guy Ryback has criticized the WWE  authorities ever since he left the company in 2016. The former Intercontinental Champion believes that the corrupt system of the WWE is burying new talents. The person that has been in Ryback’s crosshairs for the longest time is Vince Mcmahon.

According to Ryback, Vince is a draconian boss. He exploits people and plays on their weaknesses. Ryback stated that he believes that Vince has Psychological issues which are the reason for his hostility and cold nature. He took shots at him for failing to persevere in his dark childhood and called Vince’s late mother, Vicki, a wh*re.

“@VinceMcMahon like most promoters has an insatiable urge to have control. He had no control watching his mom get beat up as a child, which is a horrendous thing for a kid to witness, as their wh*re mom tries to make ends meet. Vince has failed to evolve. F*ck you old man.

It’s so crazy how many people are ok with a psycho billionaire toying with innocent people’s lives and wh*ring out a human circus, but can’t stand the actual truth of that man’s psychological weakness. 48 Laws of Power. Your clock is ticking old man. You take nothing with you.” 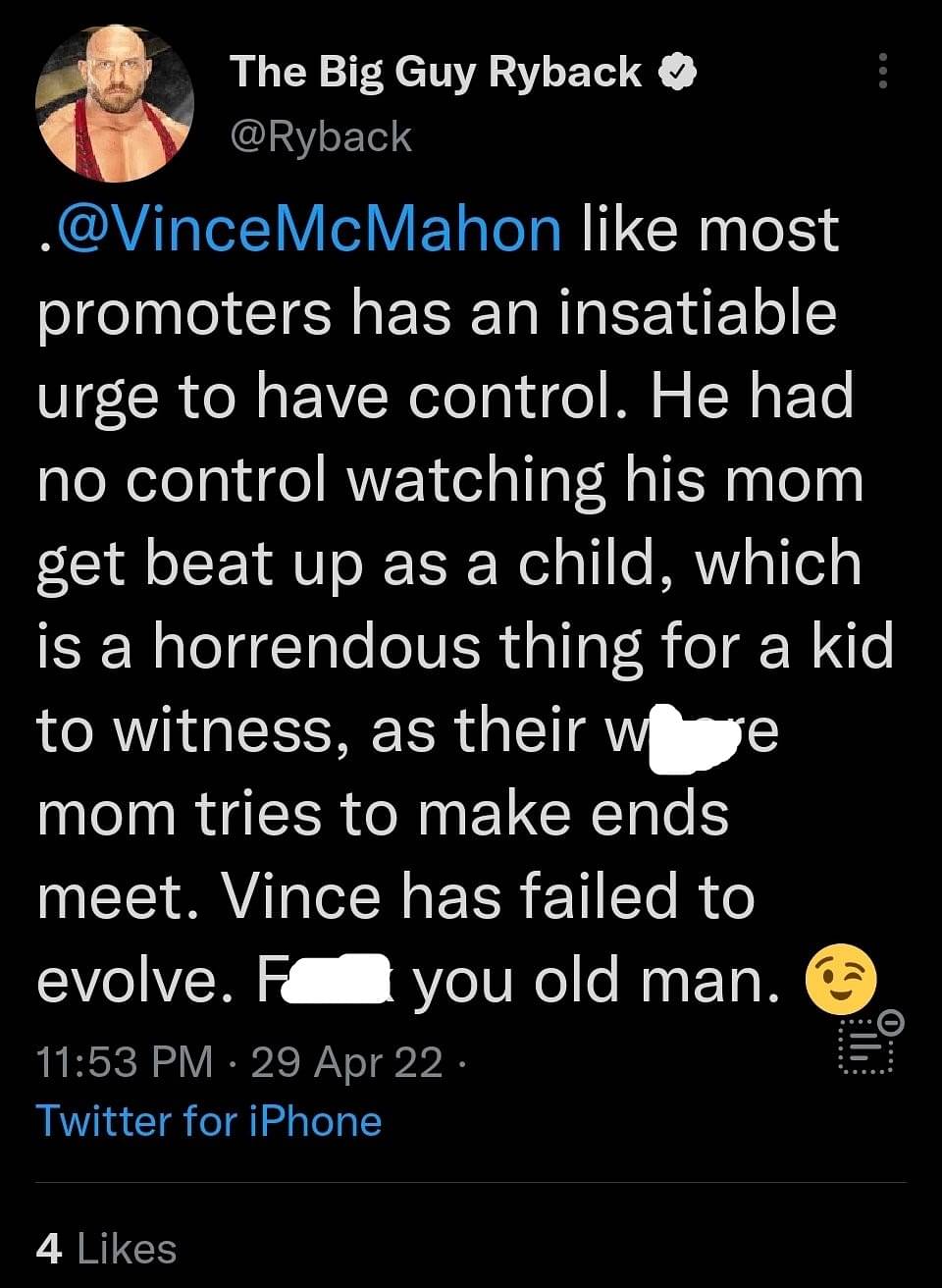 Naturally, the since deleted tweet did not sit well with the fans, many of whom condemned the former WWE star for involving Vince’s late mother.

A little about Vince’s Childhood

Vicki, Vince’s mother, died at the age of 101 in 2021 January from natural causes in her sleep. She had two boys, Vince and Rod before she divorced Vincent J McMahon. Vince hadn’t met his biological father until the age of 12. He has expressed his hate for his stepfather publicly. He once said he could kill him if he had the chance.

Ryback was released from WWE due to a contract dispute. Since then, Ryback holds a grudge. He’s got a chip on his shoulder for being released unceremoniously from the WWE. Apart from Vince, Triple H has also been a point of interest for war for Ryback.

“You’ve ended up being the biggest disappointment for me personally from loving you growing up, but I wish you well in retirement and future good health.

Ryback’s WWE career was short and due to his sudden release, a lot of relationships changed. Ryback has been vocal about it on many platforms.

Did “The Big Guy” go too far with his inflammatory remarks?

Or, are his comments justified?

Rishabh has been a pro wrestling aficionado for two decades. As a gullible seven-year-old kid he believed that his dad could only be defeated by The Undertaker. His love for pro wrestling is visible in his writing. Over the years, he took inspiration from his favorite wrestling icons and adopted fitness lifestyle. He is a big proponent of exercise. Besides that, he is a movement coach, a Steelmaceflow artist, and a Krav Maga instructor.