Randy Orton and Roman Reigns’ banter on social media is quite popular. Now, the former has come up with a hilarious reply on Reigns’ post.

The viper, Randy Orton is a popular face in the arena of professional wrestling. He is not only popular for his wrestling skills but also known for his witty nature. Many times in the past Randy has destroyed his critics with his evident witty replies. The wittiness of the WWE wrestler can also be seen on the platform of social media. Even though the wrestler does not post much on any of the social media platforms but makes sure that whenever he does, he takes the social media platform by storm.

The viper created a sensation on social media yet again. This time his wittiest post was related to his age-old banter partner Roman Reigns. The social media banter between Randy Orton and Roman Reigns has been going on for ages. While both the wrestlers share a warm relationship, the funny banter between them tickles the funny bone of their fans.

Randy Orton comes up with a hilarious reply to Roman Reigns

WWE Superstar Sami Zayn recently shared an edited throwback picture of The Bloodline and himself. The post, in no time, gained a healthy response from the fans. The response has been so well that it has been nearly the landmark of fifty thousand likes on Instagram. Randy Orton too noticed the post and did not step back from posting a hilarious reply. The comment on the post hinted that Reigns must have been quite popular with the girls back then.

Randy Orton and Roman Reigns are two such superstars who do not fail to entertain their fans even on social media. The fun banter between the two wrestlers has been age-old. It started when Orton took a jibe at Reigns’ new teeth in an Instagram post. This was in the year 2020. It was when Reigns had made his long-anticipated return to SummerSlam of 2020. Even the comeback wrestler was quick to respond to the Viper.

Since then it has been about two years since both the wrestlers had a hilarious exchange between these top wrestlers of the company of WWE. The fans were certainly looking forward to it and Randy provided them with the treat they needed. Judging by the responses to Orton’s witty praise aimed at Roman Reigns’ looks, it seems fans wholeheartedly agree with him. It would now be interesting to see how The Tribal Chief comes up with his part of the hilarious response to The Viper. 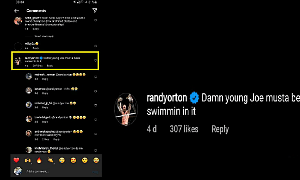 "You cant hate Seb, it's against the law"– F1 Twitter melts after Sebastian Vettel asks about where Ferrari and Mick Schumacher finished in Baku

Sri Lanka vs Australia one day match head to head: SL vs AUS ODI head to head stats and records

Freddie Prinze Jr. recently shared one of his past creative decisions that made a former WWE…