Drake pocketed $500,000 after betting on the Golden State Warriors to defeat the Boston Celtics in six games in the NBA Finals.

Drake, probably today’s biggest music performer, has long shown to be a winner in terms of album sales, chart rankings, and airtime. However, the rapper’s love for finding thrills in sports betting and gambling continues to pay off.

The Raptors fan enjoys playing with his money. He’s been playing on Stake, an online betting site, all year. The Toronto native has made it a habit to post his absurdly high gambles on his social media accounts.

That bet paid out $1,000,000 tonight after the Warriors beat the Mavericks in Game 5💰 pic.twitter.com/LCkNlLcoOA

Drake received $1 million when the Golden State Warriors defeated the Dallas Mavericks in the Western Conference Finals in 2022.

At +500 odds, the Canadian music legend wagered $200,000 on the Warriors to win the Western Conference. The wager was placed in April, before the start of the playoffs, so he had the Warriors at a premium.

Also, read – “Kevin Durant leaving was a slap in the face for Stephen Curry and us!”: Draymond Green describes what Nets’ star’s departure from Warriors felt like

Drake wins $500,000 after the Golden State Warriors defeat the Boston Celtics to clinch the NBA championship

Steph Curry and his band of brothers took down Jayson Tatum and the Boston Celtics in the NBA Finals.

The Golden State Warriors have won the championship for the fourth time in eight years, having reached six finals during that time.

Curry received his first finals MVP award after putting on a monster performance in the finals, leading the Warriors to a six-game triumph. The Warriors won three straight games after falling down 2-1 to win the championship. 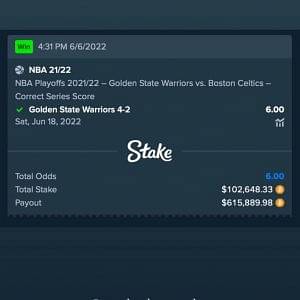 Drake revealed on social media that he had the Bay Area winning the championship 4-2 in six games. He wagered $100,000 on the Warriors to win the series 4-2 and they came through. Drizzy won his bet and brought home $500,000 as a result.

The Canadian Star has been gambling and flaunting his victories on social media all year. After the Golden State Warriors won the Western Conference Finals, the rapper received $1 million.

The Golden State Warriors appear to have broken the Drake curse, and both sides will be overjoyed with the outcome.

"Kobe Bryant got a 40-burger on Chandler Parsons and then arranged him a $22,000 dinner": When former Rockets forward thought he got made by the Lakers superstar