Here is what Tenz thinks Riot needs to remove/change/update the current agent’s abilities to balance the meta.

Tyson “Tenz” Ngo requires no sort of introduction, but to give a brief he is the best of the best. He has been one of the highest ACS players in NA competitive and the most impactful fragger for Sentinels team.

Recently Sentinels have not been performing as they should, with them being one of the best teams. Well tbh since Masters 3 Berlin we have not seen them perform well. And due to their latest performance, they did not qualify for Masters 1 Reykjavik.

But the team found a better thing to do, watch party Masters. With Tenz having almost 40K average live viewers all the time. And in one of the streams, tenz came up with something interesting.

Also Read: Ninjas in Pyjamas dominate Fnatic in their first matchup in International Lan in a 2-0 fashion 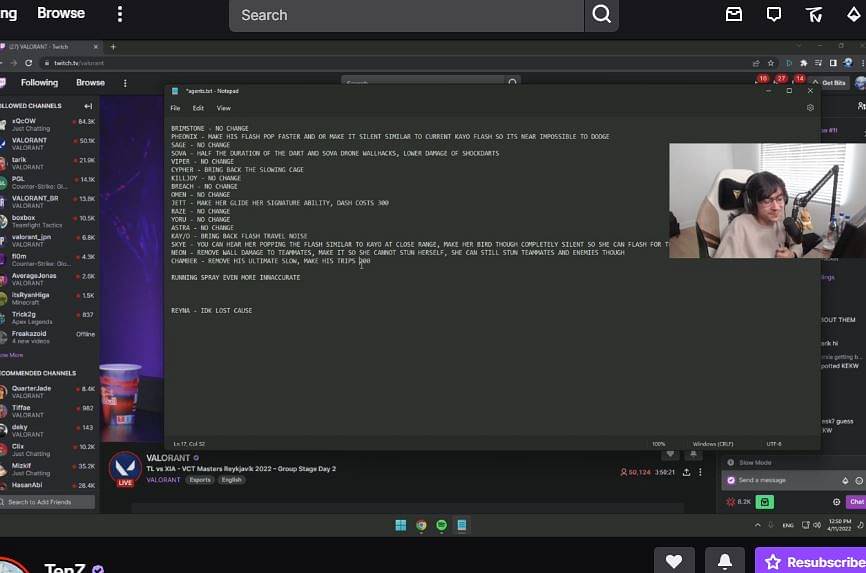 Note: The following changes were suggested by Tenz himself, and no one else. These are his opinions and you have the right to have your own opinions.

Cypher: Bring back the slowing cage. i.e. when players enter a cypher cage their movement is slowed.

Jett: Make her glide her signature ability and make the dast cost 300$.

Neon: Remove wall damage to teammates. And make it so that she can’t stun herself but she can stun teammates and enemies though.

Also Read: “Do you hecking love tenz?”: Boaster hilariously questions Scream and others during Masters Interview

Pheonix: Make his Flash pop faster and or make it silent, similar to the current KAYO flash. So it’s newly impossible to dodge.

Sova: Half the duration of the dart(player ping) and Sova Drone wallhack. Lower damage of shock darts.

Skye: You can hear her popping the flash similar to KAYO at close range. Make her blind completely silent and she can flash for teammates and not blind them.

"Ja Morant really did something that no guard has ever done": The Memphis Grizzles superstar averaged a whopping 16.6 points per game in the paint in 2021-22

"I'm not sold on Miami Heat": Charles Barkley is convinced that Kevin Durant and co will handily beat Jimmy Butler, Bam Adebayo and their Heat entourage if they clash in the 2022 NBA playoffs