Big E was reportedly scheduled to drop the WWE Championship to Seth Rollins at DAY 1 before Brock Lesnar was inserted into the title match.

Big E was originally supposed to defend his WWE Championship against Seth Rollins in singles action at Day 1. By the time the pay per view arrived however, Kevin Owens and Bobby Lashley were also added to the match. As if that wasn’t enough, Brock Lesnar also made his way into the match on the day of the event.

Also read: WWE Hall of Famer lashes out at WWE for disrespecting Big E before title loss to Brock Lesnar

Even before Lesnar’s inclusion, there was a belief among many that Big E would not walk out the WWE Champion. Lesnar, who only participated because of Roman Reigns’ covid situation, won the title, leaving many to ponder what the original planned outcome was for the match.

A faux pas from WWE On FOX Twitter account, suggests that Big E may have been the intended victor as their now deleted graphic lists Big E as the winner, albeit with Lesnar’s face on it. 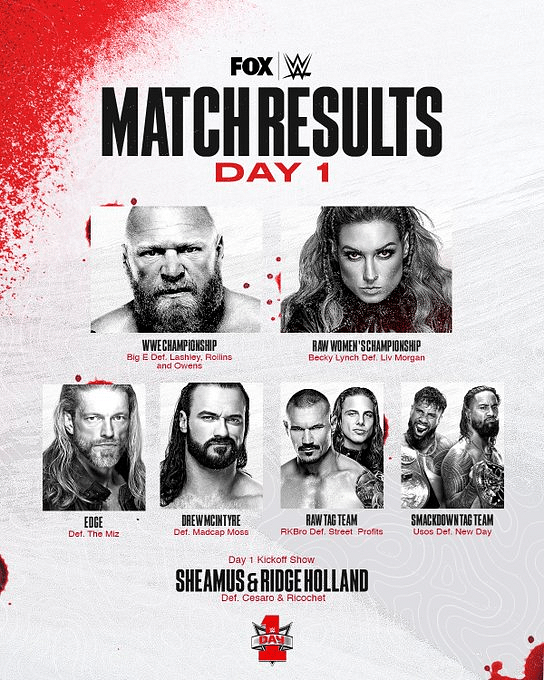 (H/T to Ringside News for the graphic)

However, Dave Melzter of the Wrestling Observer, via Sports Illustrated, has stated that Big E would have lost the title regardless of Lesnar’s participation. However, the winner of that match would have been Seth Rollins instead.

“The original plan to build for WrestleMania, whatever it was, changed greatly when Lesnar pinned Big E to win the WWE title to end Saturday’s show. The original scripted plan for the show was for Big E to lose the championship, but to Seth Rollins, who had tested positive for COVID-19 last week, and the champion instead lost his title to Lesnar as the result of another positive test.”

Brock Lesnar is scheduled to face Bobby Lashley at the Royal Rumble. This will be his first title defence since winning the championship. It is speculated that Roman Reigns may play a part in the match and cause Lesnar to drop the title to Lashley, giving Lesnar even more of a reason to chase Reigns heading into Mania.

As far as Big E and Seth Rollins’ involvement with the WWE Championship, the buck seems to have stopped for both of them at least for the time being. While Rollins can be called to the main event at any time, it seems that Big E will need a bit of time and build up before he consolidates himself at that level.

“The Subtle Art of Not Giving a F**k”: Aaron Rodgers responds to the Erin Andrews 'hug-gate' controversy and has a perfectly fitting book recommendation this week on the Pat McAfee Show